I recently gave a talk to the family on the subject of justification and church unity. Building on my earlier Bible study on The Trinity and Chruch Unity and working within a New Perspective framework, I have tried to show that the doctrine of justification is first and foremost a practical doctrine to be lived out in the life of the church. You can read my talk HERE.


To receive automatic notification every time new material is added to this blog, send a blank email to largerhope @ tiscali.co.uk with “Blog Me” in the subject heading. (Note: for anti-spam purposes, this email address has had spaced inserted before and after the @ sign. The address will only work after deleting these spaces).
Posted by Unknown No comments: 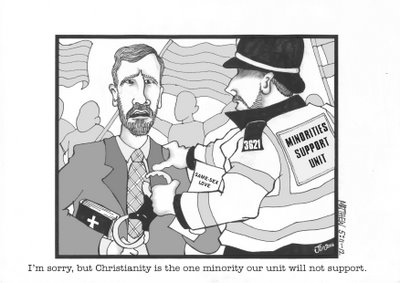 My boss was arrested by the new 'Minorities Support Unit.'

The above cartoon was done by a friend of mine named James Haram. He is a professional cartoonist, quite reasonable in his prices, and always eager to be hired. His email address is jamesharam@aol.com and his mobile number is 07986392241.

To receive automatic notification every time new material is added to this blog, send a blank email to largerhope @ tiscali.co.uk with “Blog Me” in the subject heading. (Note: for anti-spam purposes, this email address has had spaced inserted before and after the @ sign. The address will only work after deleting these spaces).

A couple friends have recently asked me what this thing called 'The New Perspective on Paul' is all about.

I’m afraid I only have time to give a few pointers for those who are interested in further study.

A good brief explanation of the NPP, along with the names of the main contributors, can be found HERE. The New Perspective on Paul (NPP) should really be called the Old Perspective on Paul since it seeks to align Pauline scholarship with its original 1st century historical and theological context, with particular concentration on understanding Paul’s relationship to the Judaism of his day. Within that general rubric, the New Perspective is far from monochrome, but represents a loose and rather fluid network of thinkers and viewpoints about which it is hard to generalise.

Nevertheless, there are some overarching elements. In a nutshell, the NPP developed out of historical scholarship which showed, or claimed to show, that 1st century Judaism was not a religion of merit legalism. That is to say, the Jews of Jesus and Paul’s day were not proto-Pelagians who believed they could earn salvation through works righteousness.

This simple realisation, if true, has enormous implications for Pauline studies. Ever since the reformation, it has been customary for Protestant exegesis to assume that Paul was countering Jewish merit theology in books such as Romans and Galatians. If however, it can be proved that this reading of Paul is based on a fundamental misunderstanding of Second Temple Judaism, then perhaps Paul actually meant something else in these epistles. Taking this line, those who advocate the NPP would argue that Paul's contention with the Judaizers was not about Christian grace versus Jewish legalism, at least not in the contemporary sense of these terms. Rather, they point out that his argument revolved around the status of Gentiles in the church. Paul's doctrine of justification, therefore, had far more to do with Jewish-Gentile issues than with questions of the individual's status before God.
.
Dunn explains it like this: since salvation comes to all who put faith in the Messiah, it follows that the markers which have served as the boundaries between Jew and Gentile can no longer function as the markers of the people who are the true people of God. It is in these, in the presence of these boundary markers and not at attempts at self-help justification that the apostle refers when he speaks of the works of the law. So when Paul says we are saved by grace and not by works, Paul’s antithesis is not between salvation by grace and salvation by works; rather, Paul’s anti-thesis is between salvation by Christ the Messiah, with its implications about the universality of his reign and the restoration of the kingdom of God, over against the narrow disgracing of the grace by those who would reinstate the old boundary markers as the distinguishing features of the covenant community.
.
Even Paul's discussion of predistination in Romans 9, revolves more around Jew/Gentile issues than issues of personal regeneration. The NPP has also tried to nuance other New Testament terms such as 'justification' and 'the gospel' by realigning them with their 1st century context. (See Ollif's article on what the ‘the Gospel’ REALLY means HERE, which is along similar lines to some points Leithart makes in his book Against Christianity) The result is very enriching because we find that these doctrines mean more, not less, than customarily assumed.

Those who advocate the NPP are not saying that the traditional protestant categories are in themselves false, only that these were not the issues Paul happened to be addressing. Nevertheless, there have been numerous critics who have erroneously claimed that N. T. Wright and the NPP undermines the basic doctrines of the reformed faith.

Rich Lusk points out HERE and Doug Wilson HERE that just because the Jews professed grace in theory does not mean they really believed it. They remind us that even the most die-hard ideological Calvinist can be a legalist at heart. This should cause us not to naïvely rush into affirming that the Judaism of Jesus’ day was a religion of grace. Although I think that’s a valid point, my own position is that regardless of whatever view we take on Second Temple Judaism, it can be established on purely exegetical grounds that Paul was not addressing merit legalism when he wrote Galatians and Romans. That's a whole side of the NPP which Doug's critique seemed to overlook. Derrick Olliff has proved, conclusively to my mind, that legalism and works righteousness were not on the radar screen when Paul wrote Galatians. See his excellent article When the Fullness of Time Had Come: Paul’s Gospel to the Galatians and, along the same lines, Rich Lusk’s article ‘The Galatian Heresy: Why We Need to Get It Right’ and Tim Gallant article What Saint Paul Should Have Said: Is Galatians a Polemic Against Legalism?. Also, whether 1st century Judaism was or was not a religion of grace, it can be shown on scriptural grounds that this is not the issue Jesus addressed when he critiqued the Pharisees. See Ollif’s article 'Looking for Legalism'.

My interest in the New Perspective arose from reading the works of N. T. Wright (whose writings can be read HERE). The first book I read was What Saint Paul Really Said, which is a good starter for anyone interested in the NPP. As I told Bishop Wright earlier in the year when I met him at a conference, before I began reading his books, Bible study was not that enjoyable for me, but something I just did out of duty (that was also before I discovered authors from the reformed tradition, by the way). I tended to see everything in isolation – a verse here, a verse there – without grasping the bigger picture. Wright’s work brought the Bible alive for me because it helped me to see how everything fits together in the bigger picture. Understanding the continuity between the Old Testament and the New Testament would be the most obvious area where this is the case.
I have written further about the New Perspective HERE.

Reformed believers who have been told that Wright is a dangerous heretic, should read the following articles before making too hasty a judgement:

A SHORT NOTE ON N. T. WRIGHT AND HIS REFORMED CRITICS by Rich Lusk

Are Wright's Critics Misreading Him?, by Mark Horne

Why is Wright Misrepresented and Misunderstood by So Many of His Reformed Critics?, by Alastair Roberts

Within The Bounds of Orthodoxy?: An Examination of Both the Federal Vision and the New Perspective on Paul, by Joseph Minich

Since writing the above, David Field has put some New Perspective thoughts on his blog, specifically to do with interpreting Romans. See HERE.
While we're on the subject of David Field, although this doesn't relate specifically to the NPP, I have to recommend his last talks at the last Auburn Avenue pastor’s conference which were highly fascinating. You can download David's talks or any of the speakers talks individually HERE or if you want to buy a set of the entire conference go to THIS webpage. The handout for David's first lecture can be downloaded HERE while the handout for his second and third lecture can be downloaded HERE. Alternatively, see the 49 page document David has written covering the same ground as his second and third lectures is HERE.
To receive automatic notification every time new material is added to this blog, send a blank email to phillips7440 [at sign] roadrunner.com with “Blog Me” in the subject heading.
Posted by Unknown No comments:

Here's a picture of Susanna being baptised last July. You can see Esther, myself and one of the godparents. 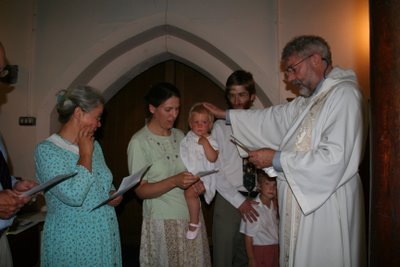 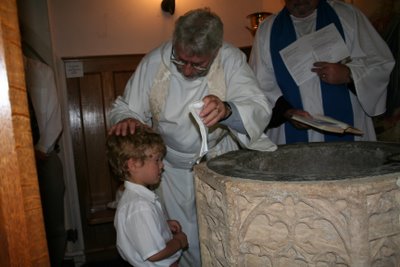 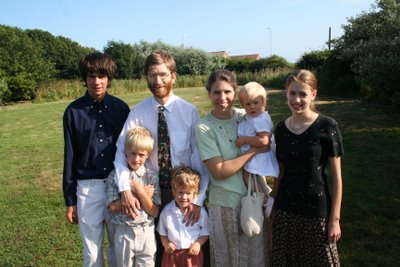 And the whole family again. 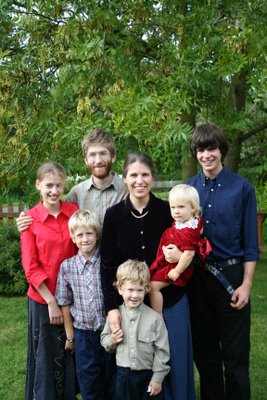