Last month a Christian friend asked my advice about defending Biblical purity to his teenage sons and daughters and their friends. How do you articulate the reasons why casual dating wrong? What is the best way to defend the Biblical sex ethic? By God's grace my answers hit the nail on the head for the family and helped them enormously, so I’ll post it here in case anyone else can benefit from it. This is what I said:

I am in total agreement with your position on relationships. As our older children become interested and involved in relationships, I’ve also been forced to explain our ethos and clarify the reasons behind it. I’ll share the approach I’ve taken.

Whenever I tell my children that intimacy is inappropriate without a clear possibility of marriage, or that casual dating is wrong, or that modesty is important, I always try to emphasize that this is because I take a higher view of love, romance and sexuality than those with looser standards. This is such an important point to emphasize since those who maintain Biblical standards of purity and integrity are frequently accused of being repressive or of having a pessimistic view of sex. But in reality, it is those who are casual with their sexuality who do not have a sufficiently high regard for it.
-
So the starting point has to be an affirmative one. If the restrictions are not seen within this positive context, then everything the parent says will just be perceived as repression, legalism, over-restriction, and so on. This is something that was impressed upon me when I was researching about the betrothal and courtship movements where the starting point can tend to be  predominantly negative.
-
Building on that, the problem with casual dating is that it trivializes relationships and treats our sexuality as unimportant. When two people are simply pursuing a relationship as a means for personal pleasure, it offers a sort of ‘emotional foreplay’ that provides the pleasure of a relationship without the responsibility of a relationship. That is hardly good preparation for marriage. Because we have been created in the image of God, casual relationships cannot fulfill us and will always leave us feeling empty even if they provide a temporary thrill.

I’ve been working my way through some of the lectures from this year’s Auburn Avenue Pastor’s Conference on the Great Commission. Wow! I recommend that everyone buy these lectures and listen to them, which you can do HERE. On David Field’s blog he gives a summary of the topics covered HERE He describes his own three lectures as ‘worthy but dull’ although I actually found them very gripping and exciting. You will need to download the handouts to David’s lectures, which are available HERE and HERE. David’s first lecture is an exegetical study of the Great Commission passage at the end of Matthew’s gospel while his second and third lecture explore what it means to say that everything we do lasts into the new heavens and the new earth.


To receive automatic notification every time new material is added to this blog, send a blank email to largerhope @ tiscali.co.uk with “Blog Me” in the subject heading. (Note: for anti-spam purposes, this email address has had spaced inserted before and after the @ sign. The address will only work after deleting these spaces).

I have just finished watching the documentary OBESSION: RADICAL ISLAM’S WAR AGAINST THE WEST. You can order the DVD from the Obsession website, or you can watch the whole thing for free on YouTube at
www.youtube.com/view_play_list?p=288A4A18DBEBFDDA
As a documentary on international Islamic terror, Obsession is a real eye-opener. Yet its chief value lies in exposing the mentality behind worldwide jihad. The makers of the film have collected numerous items of evidence and primary source material to show that the roots and goals of Muslim violence are identical to those of Nazism.

One of the most chilling parts of the documentary was when a former member of the Hitler Youth was interviewed about the threat of Islam today. The parallels he pointed out between radical Islam and Nazism are simply staggering. Islam uses the same methods to recruit youth and to vilify the Jews that Hitler developed, even employing identical anti-Jewish iconography and motifs. Islam is also as unswerving as Nazism in its ambition to achieve worldwide dominion at all costs.

The film explores Hitler’s own links with Islam. This includes his close personal connection with Haj Amin al-Hussieni, the Grand Mufti of Jerusalem and uncle of Yaser Arafat. It is a little known fact that Hitler put al-Hussieni in charge of recruiting 3 Divisions of Muslim SS which were then allied with the Nazi axis.

Obsession replays shocking footage from Arab television, showing how pervasive the anti-Israel and anti-American propaganda has become. We are also shown scenes from Islamic schools where girls as young as 3 are taught that Jews ‘are apes and pigs’ and encouraged to die in the cause of jihad.

The documentary is also a useful revelation of Islamic strategy. One Muslim was filmed saying that they intended to take over the White House. Their method of conquering the White House would not be through violence, he said, but through ideas.

The primary idea that Muslims are currently exploiting is that Islam is not a threat. The film compared Europe’s response to Hitler in the 1930’s with the contemporary culture of denial that currently exists regarding Muslim violence. Although radical Islam has declared jihad against the West, our response to this global war has largely been similar to Chamberlain’s response to Hitler: either discounting the threat or trying to appease the enemy.

Obsession is a wake up call for the West. It is a call for us to accept that we are embroiled in a global conflict and to do something about that before it is too late.

The only way the film could have been improved would have been to put Islamic violence into a wider historical context. Since the inception of Islam in the 7th century, violence has been a central feature of Muslim piety. This is hardly surprising since brutality is encouraged in the Koran and other Islamic sacred writings. Those who wish to know more about this facet of Islam should consult Robert Spencer’s The Politically Incorrect Guide to Islam and the Crusades, which I hope to review in a future post.
To receive automatic notification every time new material is added to this blog, send a blank email to largerhope @ tiscali.co.uk with “Blog Me” in the subject heading. (Note: for anti-spam purposes, this email address has had spaced inserted before and after the @ sign. The address will only work after deleting these spaces).
Posted by Unknown No comments:

Scientists can foresee a time when machines may become so human they will have rights and even be able to vote, according to this article that appeared in the Daily Mail. THIS ARTICLE from the Telegraph suggests that in 10 years robots will not only be able to have emotions, but will also be able to provide companionship. 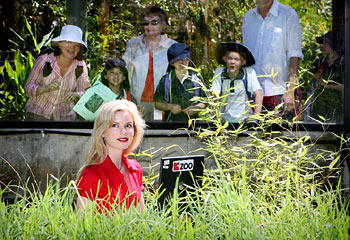 But while machines are becoming more human, people are being considered less human. I say this from the observation that increasingly human beings are being thought about and treated on a par with the beasts. An Australian zoo has recently launched a human project, where people will be caged in the zoo to emphasise that we are on the same level as the animals, as shown in this picture. (Read more about the human zoo project HERE.) I am reminded of some observations I made in my earlier post 'Man or Beast?'

One of the world's leading 'experts' in ethics is a man named Peter Singer. You can read about him HERE and visit his website HERE. In his article 'Taking Life' (which is available HERE) he argues that babies are not people until they develop characteristics such as rationality, autonomy, and self-consciousness. Yet he also believes that Great Apes are people. In fact, he is a founding member of the Great Ape Project, which seeks to persuade the United Nations to adopt a Declaration on Great Apes awarding personhood to great-apes. So apes would have more rights than babies if Mr. Singer gets his way.


To receive automatic notification every time new material is added to this blog, send a blank email to largerhope @ tiscali.co.uk with “Blog Me” in the subject heading. (Note: for anti-spam purposes, this email address has had spaced inserted before and after the @ sign. The address will only work after deleting these spaces).