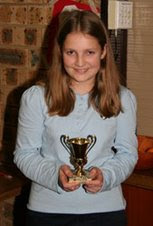 On 1 February, Melissa Busekros’ was torn from her Christian family by force, following a judge’s ruling. The 15 year old was immediately placed in a psychiatric clinic as a result of her parents’ decision to homeschool.
‘Last week, a court affirmed that Melissa has to remain in the Child Psychiatry Unit because she is suffering from “school phobia”, reported the Washington Times on 28 February.

The situation arose after Melissa, the Busekros’ eldest daughter, failed 7 grade at the local state school, due to bad grades in Maths and Latin. Because she achieved good scores in all other subjects, Melissa’s parents had decided that she would be tutored at home in those subjects instead of doing the entire year over again. Melissa continued to attend the school for music and choir. All the Busekros’ other children attended the state school.

School officials responded by kicking Melissa out of the school and allocating her to the local Hauptschule (the lowest in Germany’s three-tier high school system). Mr. and Mrs. Busekros responded to the decision by homeschooling Melissa full time.

At the end of the school year 2005/2006, Melissa was 15 and no longer subject to full time compulsory schooling. However, the authorities were still not happy. On 30 January, 2007, social workers and police officers suddenly showed up at the Busekros’ home and forcibly took Melissa to the Nuremberg Child Psychiatry Unit. After being questioned for three and a half hours, Melissa was released and allowed to return to her parents and five younger siblings.

The Busekros family thought everything was fine until, two days later, 15 police officers showed up to take Melissa to the clinic again and officially removing her from her parents’ custody. The decision was justified on the grounds that the psychiatrist that had interviewed Melissa two days earlier, claimed to have discovered developmental delays of one year and along with a condition of ‘school phobia.’

"…the official approach in cases of “school phobia” is to completely prevent the 'patient' from having any contact with those closest to him or her, as such contact supposedly enables the phobia" reported the Netzwerk Bildungsfreilheit in a press release.

Melissa’s parents were not informed of her whereabouts until a hearing on 16 February. They are now allowed to visit her, although Melissa is not allowed to return home to live with her parents and siblings.
The psychiatrist’s report cited Mr. Busekros’ antagonism to further standard schooling of Melissa and his insistence that she is ready to begin university in summer 2008 as a reason why ‘a basic reorientation in a special education facility / group home is urgently required in order to avoid danger to the further development.’

Melissa’s father said he and his lawyer were offered a compromise that they could not accept. The Home School Legal Defense Association reported that ‘The authorities wanted the Busekros's to give up custody of their other five children in order to resolve this situation. Hubert said the authorities are considering doing psychiatric exams on the other five children in order to implicate Hubert and his wife as unfit parents and thereby break up the family.’

WHAT YOU CAN DO ABOUT IT

Write to your MP and ask them to forward your comments to the Rt. Hon Margaret Beckett, Secretary of State for Foreign Affairs. Say that our Government needs to be making representations to the German Ambassador. Also contact

For more addresses of people you can contact to protest about this matter, see THIS LIST. (Note, although email addresses are being given, it appears that they are being routinely erased instead of being read, so you are best off writing a letter in the post.)

Melissa’s father is asking people to write to her offering encouragement during this difficult time of separation. Her address is:

To complain generally about the German antagonism to homeschoolers, contact the following people whom the German Government has given the power to make relevant decisions on such matters:

‘Last March, a judge in Hamburg sentenced a home-schooling father of six to a week in prison and a fine of $2,000.’ (Paul Belien, ‘2007 German horror tale’, Wasshington Times)

In October 2006, police officers arrived at the home of the Romeike family (homeschoolers) to forcibly escort the children to school. (‘Updates from Germany--War on homeschooling’)

Last year the German police arrested Katharina Plett, a homeschooling mother of twelve. The rest of the family managed to escape when her husband fled to Austria with the children. (Read the Brussels Journal Report)

German parents are routinely imprisoned for not paying the fines they receive for educating their children at home. One religious organization was fined 130,000 Euros for homeschooling their children. In October 2004, seven dads spent several days in jail for refusing to pay fines that were imposed on them for failing to send their children to government schools. (Read report HERE.)

On Friday 20 October 2006 at around 7:30 a.m. the children of a homeschooling family were picked up by the police and escorted to school in Baden-Wurttemberg and told that this would happen again next week. (See the World Net Daily’s report German Homeschoolers Under Fire.)

On 11 September 2006, the European Court of Human Rights dismissed an appeal against a ban on homeschooling introduced by the Nazis. Although home education has been illegal in Germany ever since Hitler outlawed it in 1938, Fritz and Marianna Konrad sought to challenge the law by appealing to the EU Court of Human Rights. The Court supported an earlier German verdict which stated that homeschooling ran counter to ‘the general interest of society’ since it could lead ‘the emergence of parallel societies based on separate philosophical convictions…’

In order to prevent families raising their children with philosophical convictions separate to that of the state, the Court has said the right to education ‘by its very nature calls for regulation by the State.’ (Read the LifeSite report)

‘The United Nations is also restricting the rights of parents. Article 29 of the U.N. Convention on the Rights of the Child stipulates that it is the goal of the state to direct the education of children. In Belgium, the U.N. Convention is currently being used to limit the constitutional right to home-school. In 1995 Britain was told that it violated the U.N. Convention by allowing parents to remove their children from public school sex-education classes.’

To receive automatic notification every time new material is added to this blog, send a blank email to largerhope @ tiscali.co.uk with “Blog Me” in the subject heading. (Note: for anti-spam purposes, this email address has had spaced inserted before and after the @ sign. The address will only work after deleting these spaces).
Posted by Unknown