States' Rights and the Meaning of Freedom

“That these United Colonies are, and of right ought to be, FREE AND INDEPENDENT STATES; that they are absolved from all allegiance to the British crown and that all political connection between them and the state of Great Britain is, and ought to be, totally dissolved; and that, as free and independent states, they have full power to levy war, conclude peace, contract alliances, establish commerce, and do all other acts and things which independent states may of right do” (emphasis in original).

The Concept of Freedom

For a long time I struggled to understand the concept of freedom as it was used in American political rhetoric. As a boy I frequently heard people talk about the freedom and liberty - especially on the 4th of July - and I wondered what it meant. No one was really able to tell me so one day I looked ‘freedom’ up in the dictionary. To my surprise I saw that it simply meant ‘the absence of restraint.’ Well, I thought, freedom isn’t necessarily a good thing, because total freedom (absent of restraint) would mean no government at all. All that happened during the Revolutionary War, I reasoned, was that America stopped being governed out of London and started being governed out of Philadelphia, and it is only sentimentality to say that one is ‘freedom’ and the other isn’t.

What I didn’t understand, and what many Americans don’t appreciate, is that the concept of ‘freedom’ during the inception of America was not a free standing timeless principle, but a concrete context-dependent notion. It meant self-government just as it did in the classical era. It referred to the colonies' ability to govern themselves instead of being governed by Parliament or the King. The colonies didn’t want an abstract, mythic, vague kind of freedom that no one can really define but which everyone is supposed to somehow know what it means; rather, they wanted the very specific freedom for each colony to be autonomous. And that freedom, they believed, went hand in hand with responsibility.

It follows that when Patrick Henry said, ‘Give me liberty or give me death’ he meant liberty for the people of Virginia to form their own legislature and not to be ruled by Parliament, nor by Philadelphia or Washington DC if it came to it. When the founding fathers like Jefferson spoke of freedom and liberty, they were drawing on concepts found in classical Greek and Latin authors where freedom meant local self-government. On the other hand, when modern Americans sing about America being the ‘land of the free’ or recite the words ‘liberty…for all’ in the Pledge of Allegiance, they usually mean freedom and liberty as skwooshy abstract concepts and would be flustered if pressed for a definition. Probably no one who cites the pledge thinks he or she is talking about liberty for Idaho to pursue sovereign self-government, and if they did think that, the words “one Nation” and “indivisible” would at once render such an interpretation untenable.

The Independent Nation of Vermont

At the risk of overstating my argument, the Americ 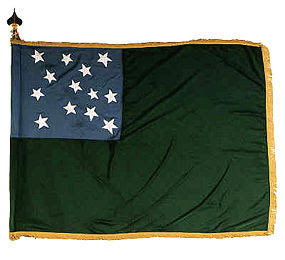 ans saw themselves as a collection of separate colonies that were only loosely connected together to fight on behalf of each other for a common cause: colonial self-government. The state of Vermont even declared itself an independent nation in January 1777 and fought its own separate war against the British. Consequently, Ethan Allen and his ‘green mountain boys’ were not fighting for the independence of America, as is often thought, but the independence of the Republic of Vermont. On the left is a picture of the flag for The Republic of Vermont.
.
The Articles of Confederation and States' Rights

In 1781, the Articles of Confederation were ratified as the Constitution of the new and United States and served as such until the current Constitution took effect in 1789. The second article in the Articles of Confederation set forth the states’ view regarding who held ultimate political power over them: “Each state retains its sovereignty, freedom, and independence, and every power, jurisdiction, and right, which is not by this Confederation expressly delegated to the United States, in Congress assembled.”

The Articles of Confederation established the union of states as a ‘confederacy’ and a voluntary ‘league of friendship.’ Speaking about the Articles, John Dwyer writes,

“The states declare themselves as sovereign, on the human plane, over their own destinies. They reserve the right to form, remain, or not remain in league with one another, and they convey only specific, limited powers to the association of states they have formed. These powers do not include the right to hold them together in any association against their will.’

In summer of 1787, representatives from every state except Rhode Island gathered in Philadelphia to discuss revisions to the Articles of Confederation. The convention delegates sought to strengthen the power of the central government but still prevent the new government from encroaching upon the states’ rights of self-government. It soon became apparent that a new document would be required, and this led to the drafting of the Constitution. James Madison suggested that the new federal government be given the power to veto state legislation. The proposal was overwhelmingly defeated. It would have gone against everything they had fought for in the war against the British. Backing down, Madison explained that federal activity would be confined almost exclusively to foreign affairs, while the actual governing of the country would be the province of the individual states.

“So concerned were Virginians about the possibility that the new Union would infringe upon their rights of self-government that upon ratification of the Constitution Virginia declared that it reserved the right to secede from the Union. …evidence from Virginia’s ratifying convention makes clear that the delegates believed they were entering a voluntary compact among states rather than yielding their sovereignty to an all-powerful national government. New York and Rhode Island would include similar clauses in their own acts of ratification.” (Dr. Thomas Woods, ibid)

“His Britannic Majesty acknowledges the said United States, viz., New Hampshire, Massachusetts Bay, Rhode Island and Providence Plantations, Connecticut, New York, New Jersey, Pennsylvania, Delaware, Maryland, Virginia, North Carolina, South Carolina, and Georgia, to be free, sovereign and independent States; that he treats with them as such, and for himself, his heirs and successors, relinquishes all claims to the Government, propriety and territorial rights of the same, and every part thereof.”

Note that King George was required by the terms of the treaty not to admit that ‘America’ was independent or even that ‘the United States’ was independent, but that the thirteen named states were independent.
.
.
To join my mailing list, send a blank email to phillips7440 (at sign) roadrunner.com with “Blog Me” in the subject heading.
Posted by Unknown