In the summer of 2007, I researched the War Between the States in preparation for teaching it to a class of 11th graders. Because I had no previous background in history, let alone this period, and also because the school didn’t give me any textbooks to use, I really had to build my curriculum from scratch. Although this approach was difficult and time-consuming, compared to just taking everything out of a textbook, it ended up being a great benefit because it meant that I avoiding a lot of the biases and myths that so often characterize civil war historiography.

One of the things that immediately began to strike me as I began reading the writings, speeches and letters of the time, is that there was an entire context to the War Between the States that is often overlooked.

I don’t know about you, but I had always grown up thinking of the War Between the States in very simplistic terms: the North were the good guys, the South were the bad guys, and the fight was over slavery. Moreover, the South were so eager to keep their slaves that they were willing to divide the union – that indivisible entity which our founding fathers had bequeathed to us with their blood. The South’s decision to secede from the union was an unprecedented act in American history with no constitutional basis, forcing a reluctant Lincoln to respond with the force of arms. And so on.
.
In a series of blog posts, I shall be sharing some of the things I discovered from the primary sources which prove that this basic caricature is not only incorrect, but in many cases the opposite of the truth.
.

I’d like to begin with the idea that the South’s decision to secede from the union was an unprecedented act in American history. This article will try to chart the larger context for understanding the secessionist movement.
.
Secession in Context
When I began researching, I was shocked to discover a whole pedigree of secessionist thinking - going all the way back to our founding fathers – and which had nothing to do with the conflict between the North and the South. The South may or may not have been justified in attempting to secede from the union, but if we are honest with the sources, we cannot claim that there was anything novel in their assertion that they had a right to secede. In fact, there is strong evidence that the majority of American political thinkers from the inception of our nation right up until the mid 19th century, regarded secession as a constitutional right.
.
As Thomas Jefferson put it in a letter to W. Crawford, “If any state in the Union will declare that it prefers separation... to a continuance in union... I have no hesitation in saying, 'let us separate.'” Again, in a letter to Madison in August 1799, he wrote, “[We should be] determined…to sever ourselves from the union we so much value rather than give up the rights of self-government…in which alone we see liberty, safety and happiness.”
.
As early as 1787, the states of New York, Rhode Island and Virginia had all asserted their right to secede. In fact, their state conventions adopted the Constitution only after passing legislation which confirmed their sovereign right to secede should they ever deem it necessary for the welfare of their respective states.
When Washington was President, he appointed Alexander Hamilton as Treasury Secretary. Hamilton wanted to start a national bank, yet was prohibited from doing so according to a literal reading of the constitution. To get around this problem, Hamilton argued that a national bank could be justified on the basis of the ‘necessary and proper’ clause at the bottom of section 8 of the Constitution.
Thomas Jefferson, joined by James Madison, argued that because the constitution had not granted the federal government power to establish a national bank, such a move would consequently be unconstitutional. Madison eventually gave in on the bank.
A precedent began to be set, allowing the Constitution to be interpreted in a fluid rather than a literal way. Thomas Jefferson was worried about this. He was also concerned about the calamity that might result if too much power was concentrated in the federal government. 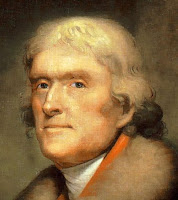 Jefferson’s fears were realized when the Federalists (who had now abandoned the classic Federalist philosophy set forth in the Federalist Papers and were pushing for more centralized union) began interpreting the constitution more fluidly. They put forward the Alien and Sedition Acts of 1798. These acts gave the central government power to interfere with the press in various states and to suppress newspapers that were supporting Jefferson’s Republican party. Jefferson’s concern was that this was a direct violation of the 1st and 10th amendments.
In his book The Politically Incorrect Guide to American History, Thomas Woods explains, Jefferson believed the only way a state could remain in the Union and retain its liberties in the face of an unconstitutional act by the federal government was for the state to declare that a federal action was null and void and would not be enforced within the state.

Thus, Jefferson, who was vice president at the time, anonymously wrote what became known as the Kentucky Resolutions of 1798, asserting a states’ right to secede. They can be read HERE. The same year Madison penned his own Virginia Resolves, which can be read HERE.
These resolutions show a belief in the fundamental separateness of States form the Union. This was important to Jefferson and Adams since it was the same principle that allowed the colonies to legitimately secede from Britain. The war against Britain had been fought by secessionists. Jefferson and Adam’s political philosophy didn’t suddenly change once America was started, as these resolutions indicate. It goes back to the idea enshrined in the Declaration of Independence that “whenever any Form of Government becomes destructive of these ends, it is the Right of the People to alter or to abolish it.”
What is interesting about the Kentucky Resolution and Virginia resolutions is that they reflect a very different view of America and a different view of Patriotism, to the one that came to be held after the War Between the States. To give one very concrete example, the author of the Kentucky Resolution would have been appalled by the words in the Pledge of Allegiance which say ‘one nation…indivisible’ (which is how it originally read; the words ‘under God’ were inserted later because the original author of the pledge was an atheist socialist who didn’t believe in God).
Anyway, I digress. For a long time after the resolutions, secessionist fever burned hottest in the North, particularly the far North. 5 separate times the Northern States threatened to secede from the Union. In 1803, they threatened to secede because of their opposition to Jefferson’s Louisiana Purchase. In 1807, the New England states again threatened to secede over the Embargo Act.
In 1812, the New England states threatened to leave the Union over the fact that Louisiana had been allowed to become a state.
The Federalists (who, again, were no longer following classic federalist doctrine but had become virtual nationalists) then became upset that their Republican opponents, Jefferson and Madison, were gaining successive presidential victories. This led the Federalists to meet in 1814 at the Hartford Convention in Connecticut to discuss secession by the northern states.

Under the influence of George Cabot, who was president at the Hartford convention, the assembly veered in the direction of demanding a change to the constitution instead of secession. However, the issue was never resolved and continued to polarize political opinion.

After the Southern states, which were largely influenced by the republicans, began acquiring more land for themselves in the West, and then after they annexed Texas, the New England states threatened to secede again.
While the secessionist fever burned in the Northern States, a tall young first-term congressman from Illinois stood on the floor of the House of Representatives and argued in favor of the right of secession. “Any people anywhere,” he said, “being inclined and having the power, have the right to rise up and shake off the existing government and form a new one that suits them better. This is a most valuable and most sacred right, a right which we hope and believe is to liberate the world.”
The man who said these words was none other than Abraham Lincoln, and this speech brought him some of the first acclaim he had ever received. Lincoln would later change his mind on Secession when it was the South, and not the North, that wanted to secede. He would call it treason.

At the time however, no one ever accused the New England states of treason for wanting to secede because it was taken for granted that they had the right to secede of they wanted to.
.
Interestingly, in 1860, the state of Vermont considered secession. Vermont had come into the Union in 1791, as the 14th state. Vermont was an independent nation prior to joining with those states that had comprised the 13 original colonies. It joined the United States by treaty, not annexation or purchase. This same model brought the Republic of Texas into the Union in 1845. During the political debates of the 1860 Presidential election season, a plurality of the Vermont state legislature asserted the right to remove themselves from the Union by treaty at any time.

But did the Constitution actually allow for secession? Technically, yes. Thomas Woods explains the matter like this:
.
“The question that no textbook bothers to raise is whether the Southern states possessed the legal right to secede. They did. Jefferson Davis, president of the new Confederate States of America, argued that the legal basis for secession could be found in the Tenth Amendment to the Constitution. That amendment had said that any power not delegated to the federal government by the states, and not prohibited to the states by the Constitution, remained a right of the states or the people. The Constitution is silent on the question of secession. And the states never delegated to the federal government any power to suppress secession. Therefore, secession remained a reserved right of the states. This was partly why James Buchanan, Lincoln’s predecessor in the White House, had allowed the first seven Southern states to leave in peace. Although he did not believe they possessed a right of secession, he also did not believe that the federal government had the right to coerce a seceding state.”
.
Click HERE for futher resources on the War Between the States.