Inerrancy of Scripture and Contradictions in the Bible 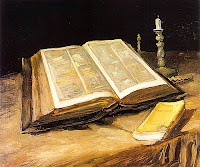 Not too long ago Joe was invited to a church meeting in which all the participants were asked to give arguments against Christianity. The leader of the meeting, who happens to be a friend, arranged to single handedly out-debate all of the devil’s advocates and defend Christianity. As I was helping Joe prepare some anti-Christian ammunition to take to the meeting, our conversation naturally turned to some of the apparent contradictions in the Bible.

At some time or another, every believer will come up against sceptics who are ready to dismiss the Bible because of a handful of contradictions. While it is possible that, through careful study and exegesis, we may discover that each one of the apparent anomalies in the Biblical accounts can actually be explained, it is still important to ask the hypothetical question, “What if the Bible did contradicted itself - how would we handle that?”
.

On this question it is easy for Bible-believing Christians to react against modern deconstruction and liberalism by adopting dogmatic views of Biblical inerrancy that are ultimately anachronistic.

Most Christians who hold a high view of the Bible would agree that scripture, in the original manuscripts and when interpreted according to the intended sense, speaks truly in all that it affirms. Where fundamentalists and sceptics alike usually go wrong is in failing to properly think through the implications of “the intended sense.”

In the interpretation of scripture, as in other forms of literary criticism, authorial intent is crucial to a correct understanding. If my interpretation of a text is not governed by the meaning that the author intended, then the result is hermeneutical chaos and ultimately we would be forced to concede that those postmodernists are correct who maintain that objective communication is impossible.

If we are to get at the intended meaning of scripture, we must ask whether any of the various Biblical writers were claiming the kind of technical precision that both fundamentalists and enlightenment modernists have come to associate with “truth.” If I am reading a legal document, any slight anomaly can count as error because the author is claiming, either implicitly or explicitly, a high degree of precision. But if you tell me that my neighbour is middle aged when he is really 38, I would be a fool to accuse you of falsehood. There is a qualitative difference in what counts as error in a legal brief or in a poem, in a letter or in a casual remark, in a road sign or in a theological treatise. It follows that veracity and falsehood cannot be determined independently of genre.

This being the case, when presented with a contradiction or an apparent contradiction in the Bible, what we really need to ask is whether the author intended the kind of technical precision that most fundamentalists have come to expect from scripture.

“Perhaps the best way to resolve this confusion,” Kevin Vanhoozer writes, “is to [ask] what counts as an error? If I say that my lecture lasts an hour, when in fact it lasts only fifty-nine minutes, have I made an error? That depends on your expectation and on the context of my remark. In everyday conversation round figures are perfectly acceptable; no one would accuse me of getting my figures wrong. In other contexts, however, a different level of precision is required. A BBC television producer, for instance, would need to know the exact number of minutes. The point is that what counts a an error depends upon the kind of precision of exactness that the reader has a right to expect. 'Error’ is thus a context- dependent notion. If I do not claim scientific exactitude or technical precision, it would be unjust to accuse me of having erred. Indeed, too much precision (‘my lecture is fifty-nine minutes and eight seconds long’) can be distracting and actually hinder clear communication. Let us define error, then, as a failure to make good on or to redeem one’s claims. The Bible speaks truly because it makes good its claims. It thus follows that we should first determine just what kind of claims are being made before too quickly ruling ‘true’ or ‘false’. If error is indeed a context-dependent notion, those who see errors in Scripture would do well first to establish the context of Scripture’s claims. To interpret the Bible according to a wooden literalism fails precisely to attend to the kinds of claims Scripture makes. To read every sentence of the Bible as if it were referring to something in he world, or to a timeless truth, may be to misread much of Scripture. Just as readers need to be sensitive to metaphor (few would react to Jesus’ claim in John 10:9 ‘I am the door’ by searching for a handle) so readers must be sensitive to literary genre (e.g. to the literary context of biblical statements).”

Sensitivity to the literary context of Biblical statements should exclude those models of Biblical inerrancy which claim more for the text than the authors themselves intended. To assume that every statement of the Bible must have the kind of precision that we normally reserve only for mathematics, is not only hermeneutically irresponsible, but it is also to compromise with the assumptions of modern liberalism. Both modern liberalism and religious fundamentalism work on the assumption that if even one contradiction could be found in the Bible then it would spoil the whole show. Such an approach simply makes Christianity vulnerable to the attacks of our critics.
.

If a critic of Christianity shows me a contradiction in the Bible, I will respond by asking them to first prove that the author was claiming the degree of exactitude necessary to render the contradiction problematic in the first place. It is true that scripture, in the original manuscripts and when interpreted according to the intended sense of the author, speaks truly in all that it affirms, but it is not true that the intended sense of the author is always what our ideas of inspiration compel us to insist upon.
The following outline is from John Frame's Doctrine of the Word of God.

The "inerrancy" of Scripture, then, may be further defined by saying that Scripture makes good on its claims.
(a) It does not always claim absolute precision. In fact, it contains many phenomena which would be incompatible with such a claim:
i) Inconsistency with modern historiographical conventions:
a) Non-chronological narrative
b) Imprecise quotation
c) anachronistic references (Gen. 14:13, etc.)
d) historical telescoping (Mt. 9: 18, Luke 8:41,49.)
ii) Other "imprecisions"
a) round numbers
b) unrefined grammar
c) pre-scientific phenomenalistic description ("The sun rose")
d) omission of pedantic qualifications (Mark 1:5)
e) use of figures, symbols
(b) Do these phenomena refute inerrancy? Only if Scripture ~ to avoid such practices, while failing to make good on that claim.
(c ) Scripture, however, does not make such a claim.
i) Scripture follows historical practices common in its day--e.g. loose quotation of sources, giving the substance, rather than the precise words being referred to.
ii) The purpose of Scripture is not to provide us with a precise scientific treatise, but to motivate us to faith in Christ, with all its implications (John 20:31).
iii) To carry out that purpose most effectively, it was not only permissible, but even necessary, to avoid pedantic side-trips, to speak the ordinary language of the people, to use figures and parables, etc.
(3) Scripture, then, is not inerrant in the sense of being absolutely precise, and/or of meeting every conceivable demand. Rather, it is inerrant in that it makes good on its own claims and carries out its own purpose.

An interesting study; another example of where the reformed and the eastern Orthodox thinking coincide.

A caution, though, is perhaps needed: a too elevated view of scripture can lead one to trust one´s own private interpretation, a gnostic tendency warned against in scripture itself in 2nd Peter 1:20. Reading the bible without the guidence of the church can actually be dangerous. The fundamentalist missionaries who beat their children on the assumption that they were ¨suffering the little children¨ is an extreme example and yet it serves to illustrate the dangers of private interpretation. A more real example would be circumcision. Circumcision is currently practiced in America and England and virtually no where else in the world outside Muslim countries and Isreal. Why is this when the health benifits have been comprehensively discredited and studies show how it traumatizes the baby? Why is this the case when baptism replaced circumcision as the sign of the covenant? It seems a devilish joke of the highest order. Why? It is because of a private reading of the Old Testiment, which has left many Christians confused and in hermeunitcal never-never-land.

These are not disagreements as much as they are observations and agreements with what you have written. Thanks for sharing your insights.