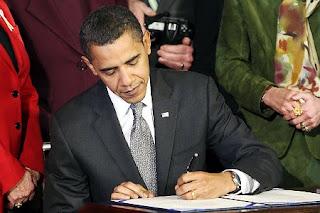 (A shorter version of this article appeared in the monthly magazine of Christian Voice , a UK ministry whose website is http://www.christianvoice.org.uk/.)

Former America President, Ronald Reagan, once remarked that the nine most terrifying words in the English language are: “I'm from the government and I'm here to help.”
Reagan understood an important principle: as soon a government becomes benevolent, the totalitarian temptation is sure to be lurking near.
Obama, on the other hand, appears to have taken Reagan’s terrifying phrase as a template rather than a warning. The latest example of the President’s “I’m-here-to-help” enthusiasm occurred on 23 March, 2010 when he signed into law a bill requiring every individual to have or buy health insurance coverage.
Read More
Posted by Unknown