R.C. Sproul Reveals Himself to be Heterodox 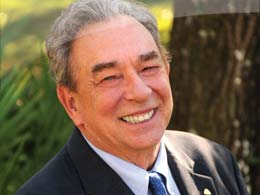 "At the moment the Roman Catholic Church condemned the biblical doctrine of justification by faith alone," wrote R.C. Sproul here, "she denied the gospel and ceased to be a legitimate church, regardless of all the rest of her affirmations of Christian orthodoxy. To embrace her as an authentic church while she continues to repudiate the biblical doctrine of salvation is a fatal attribution."

R.C.'s words serve as a good example of the false type of thinking that I argued against in my article 'Sola Fide: The Great Ecumenical Doctrine.'  A correct understanding of Sola Fide not only undermines the legitimacy of Sproul's position, but reveals his theology of salvation to be heterodox.

Sproul is unfortunately echoing a large body of evangelical thought whereby the notion that we are saved by faith in Jesus Christ and Him alone for salvation has been confused with the notion that ‘we are saved by believing in justification by faith alone.’ I have come across this error frequently in conversations with evangelicals who have told me that while individual Roman Catholics can be saved, this can only happen if they “trust in Christ alone for salvation.” When asked what it means to “trust in Christ alone”, they will say that this means that the person must not trust in their works. That is to say, the Roman Catholic must assent to Sola Fide before the possibility even exists of them being justified by grace. Thus, while Sola Fide may not be a sufficient condition for being saved, it is certainly perceived to be necessary for salvation.

But such a position is heterodox, as I hope to show.


If Sola Fide is true, then to deny it (for example, to say that we are saved by faith in Christ plus works) is to lack perfect faith. Yet can any one of us really claim to have perfect faith? Evangelicals frequently hold meetings where someone will testify that they learned to make Christ Lord of some new area of their life. Well, what does that mean other than that such a person realized by God’s grace they were trusting themselves, and not Christ, in some important area of their life? The person had imperfect faith, but that does not mean they had no faith at all. Similarly, in matters relating to salvation, even staunch five-point-its-all-by-grace Calvinists can fall into the trap of unconsciously trusting in themselves rather than Jesus. But this lack of perfect faith does not mean that the person in question cannot be saved. As the judicious Hooker put it in A Learned Discourse on Justification,


They be not all faithless that are either weak in assenting to the truth or stiff in maintaining things any way opposite to the truth of Christian doctrine. But as many as hold the foundation which is precious, although they hold it but weakly and as it were by a slender thread, although they frame many base and unsuitable things upon it, things that cannot abide the trial of the fire, yet shall they pass the fiery trial and be saved, who indeed have builded themselves upon the rock which is the foundation of the Church.

In their book Lutheranism: The Theological Movement and Its Confessional Writings, Gritsch and Jenson have suggested that if one is justified by believing that one is justified, then we have unwittingly embraced “a works-righteousness that makes medieval Catholicism seem a fount of pure grace” by comparison. As they note,


This “belief”-condition is either too easy or too hard. If, as usually happens, “faith” is psychologized into the holding of certain opinions and/or attitudes, then to offer salvation if only this work is done (never mind others) peddles grace more cheaply than did the worst indulgence-sellers. We usually sense this, and try to patch on a little authenticity by adding a few more conditions such as “love” and “really” believing. Then even the verbal reminiscence of the Reformation is lost, and the pattern of medieval Catholicism is fully embraced….

“Faith” no longer means, in ordinary usage, what it did in the usage of the Reformers. Perhaps the abstract best would be to eliminate the vocabulary of “justification” and “faith” from our gospel-language altogether; for, as the words “justification by faith” are now almost certain to be understood, they are an exact contradiction of the Reformation proposition.

…the whole point of the Reformation was that the gospel promise is unconditional; “faith” did not specify a special condition of human fulfillment, it meant the possibility of a life freed from all conditionality of fulfillment….

Sola Fide affirms that if a person is saved, it is only because of Christ and His finished work, mediated to us through our faith, and that all other things are irrelevant. The ‘all other things’ include imperfections in and misunderstand about faith itself. The Protestant who really believes Sola Fide is thus released from having to assume that the efficacy of a person’s faith is dependent on a person having a correct theology about faith.

The same point can be made by way of analogy. A person can die of microbiological poisoning without believing in microbiology, as was the case until comparatively recently in human history. Likewise, a person can experience the results of living on a heliocentric planet without believing in Heliocentrism, as is still the case for some primitive peoples. Similarly, a person can be saved by faith alone without believing in justification by faith alone, as everyone agrees is the case with children and mentally handicapped individuals.
If we can get this simple fact straight, there are enormous implications for the ecumenical agenda. The Protestant is released from having to assume that the efficacy of a person’s faith is based on that person having to agree with his theology of justification. This allows a Protestant to rejoice in the faith of those (such as Roman Catholics) who hold to a different theology of faith. It can enable there to be common ground between those who affirm Sola Fide and those who do not.

The real irony here is that R.C. Sproul can condemn Roman Catholicism for allegedly holding a wrong view of justification while Sproul himself holds views about the atonement that are heterodox. For example, he condemns the position that “It was the second person of the Trinity Who died” and writes that "We should shrink in horror from the idea that God actually died on the cross." How odd that someone who can say it is heretical to assert that God died, can reject the entire Catholic church for not holding to justification by faith alone.

I have suspected for some time that faith is a kind of pledge of fidelity so that faith is about which master you pledge yourself to. When we become Christians, we spit on the devil, renounce him and all his works and then publicly declare that we unite ourselves to Christ. I suspect that "believe" means something like "to give one's heart," so that the Creed could be translated as "I give my heart to One God, that Father Almighty."

But I have not been able to confirm or deny this.

If true, then faith is the disposition of a heart turned toward God, loving God, a life given entirely to God, not simply a mental act of thinking some thing are true. As we say in Church, "we dedicate our selves and our whole lives unto Christ our God."

If you really dig deep into Orthodox Dogmatic theology, you will find the quotes of the Fathers that speak of the inefficacy of our own good works and necessity of trusting in Christ for our salvation. But it is not really hard to find if one is immersed in the prayers of the Church and not just embroiled in internet debates. We pray "Lord have mercy", "Save us", We confess that we are sinners and have never done anything good in God's sight. We even ask Christ to help us repent because left to our own, we would probably screw that up as well.

But the real majesty and grandeur of the Christian Mystery is the work of Christ taught through the Great Feasts of the Church. Incarnate to destroy sin, Crucified to revoke the curse, and Resurrected to overcome death. And that's just the tip of the iceberg. These Feasts teach us that God has "set himself for salvation and will not change his mind," so that we know that Christ is determined, willing, and able to save and has overcome all obstacles and defeated every enemy so that we know that nothing can separate us from the love of God. Knowing these things we are justified in placing our faith in, giving our hearts to, so great a savior.

AS an Accountant, I know that the most common mathematical errors are TRANSPOSITION ERRORS. Martin Luther's doctrine of "sola fide" is a transposition error (plus the incorrect addition of the world "alone") to Ephesians 2:8, where St. Paul writes that "You are saved by GRACE, through (the) Faith." Note that Latin does not utilize the word "the." Martin Luther changed the debate to FAITH: either with or without works. Whereas St. Paul in Holy Scripture tells us we are saved by GRACE; and that GRACE comes through the Faith e.g. the Sacraments are vehicles of God's Grace; prayers taught by the Catholic Church are vehicles of God's Grace, and the wisdom of the Gospel, and the Decalogue come down to us through the Catholic Faith. The other definition of faith, referring to the virtue of faith, would qualify as a "work" because every virtue is a habit, and therefore a work. Let's get back to the truth of Scripture: we are saved by Grace which comes to us through (the) Faith.